The spectacular southern province of Spain Andalusia is a blissful tourist hotspot that offers a wide variety of activities and attractions for the wandering souls. The historic cities, charming white villages, exceptional architecture and art make the region worth visiting. This Majestic region lies between Mediterranean and Atlantic. Picturesque national parks, sandy coastlines, and delicious local cuisines are only a few highlights of the region. It is also an ultimate gastronomic destination for true foodies. Everything about the region is magical and surreal. Here are the most popular and top rated cities of this majestic region and a few things to do in each of these. 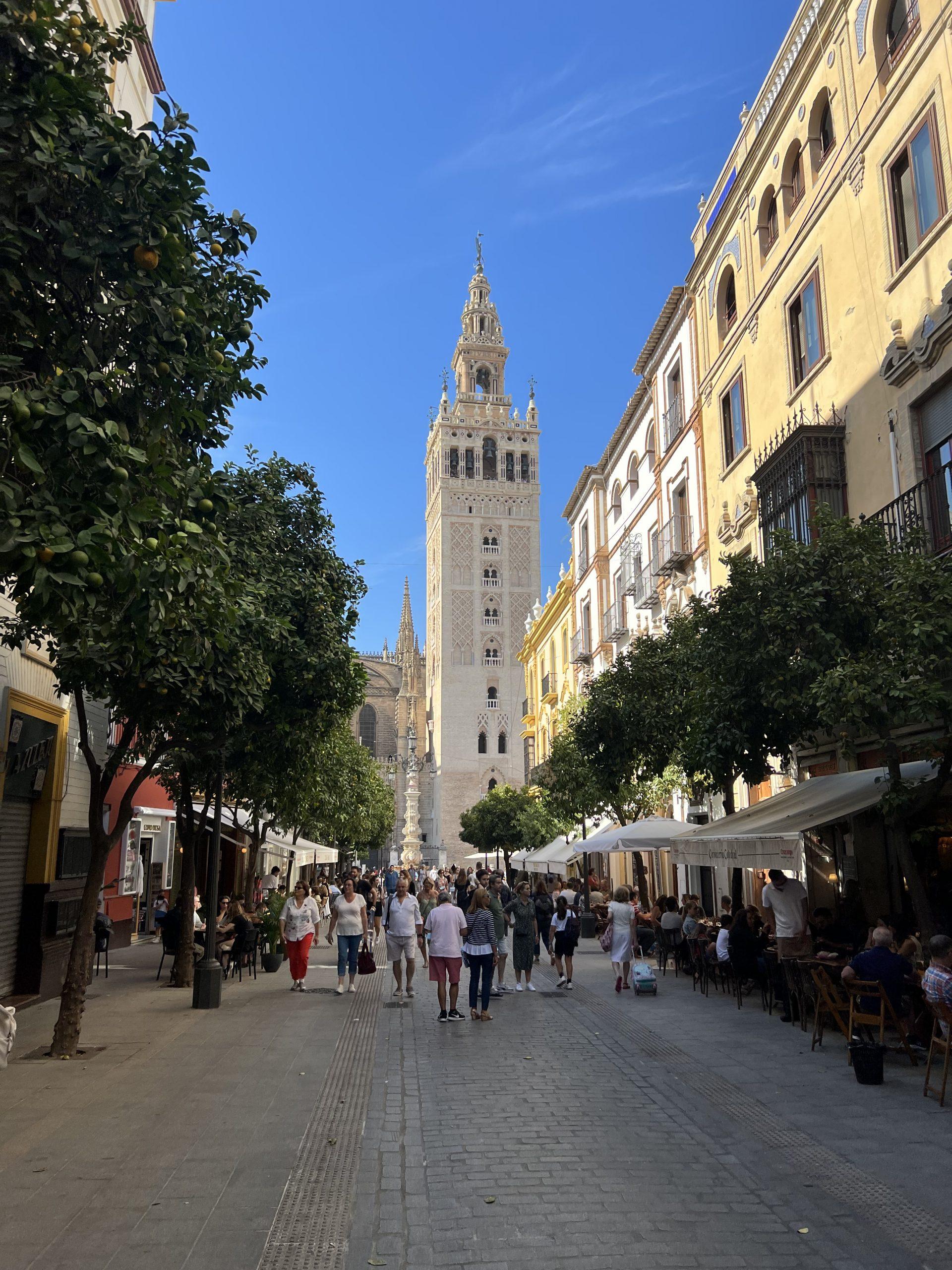 Seville is the capital of Andalusia which also happens to be the centre of Moorish civilisation.  Moorish Heritage radiates through the beautifully painted tiles, palaces, minarets, and lobed arches.  3 most popular things associated with Spain are tapas, toros and flamenco which are originally associated with Seville. The city is home to some of the most iconic landmarks and the most popular of them is the SeviIlle cathedral. It is an enormous structure with beautiful relics, curios and architectural flourishes. It is a world heritage site with 80 different chapels. You can still witness the hints of a mosque which stood here once. Don’t forget to visit the tomb of Christopher Columbus which is also a part of the cathedral.

Next big deal in city is Giralda, which can be visited under the same ticket. Its Moorish origin can be spotted by the minaret. It is said that the muezzin used to ride his horse up to the top instead of walking.

The Real Alcazar is still under the use of the Spanish royal family. You can visit the state room, balls and chambers of the royal family. The complex is an exceptional depiction of Mudejar style. It was built in the 14th century.

The semi-circular Plaza of Espana is another striking monument which was built in 1929. This colossal monument will leave you awestruck.

Some other must visit places in Seville are: 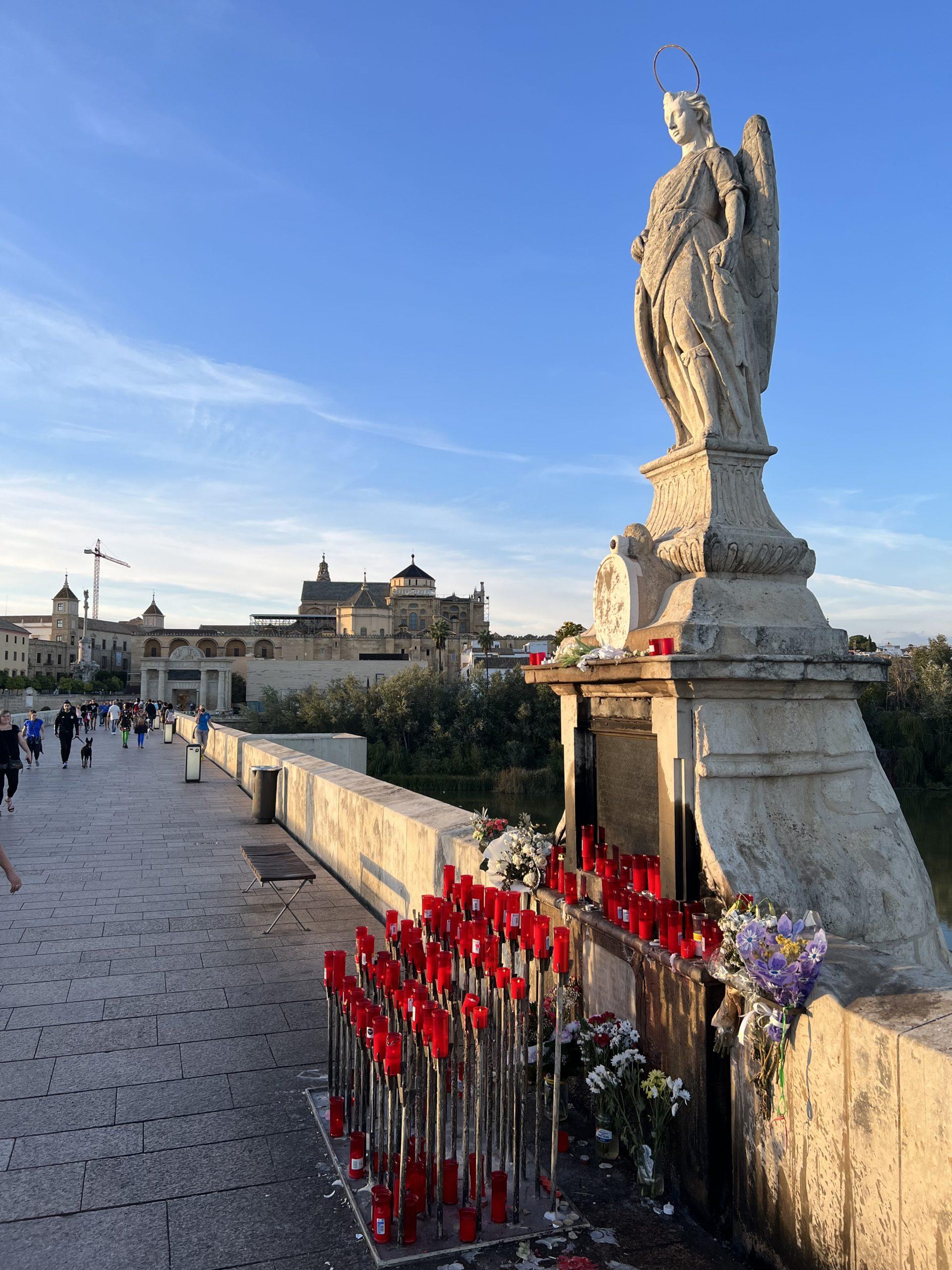 A thousand years ago, Cordoba, the largest city in the world this was also the capital of the caliphate.  Even though the Umayyad caliphate is gone a long time ago, but you can still witness the mosque, cathedrals, and other exceptional architectural structures from centuries ago.

The first and the most striking architectural structure of Cordoba is the Mosque-Cathedral.  It is a symbol of golden age with numerous artistic pieces all along.  The mosque was turned into a church in 1236, and numerous chapels were built until 1500, when it became a cathedral.

The Jewish quater and historic centre offer a great opportunity to experience the well preserved part of the Moorish Cordoba.

The roman bridge of Cordoba is one of the most postcards worthy sights in the city.  The Roman Bridge dates back to the first century and you can admire the mediaeval architecture preserved in the best way possible. Some other must visit attractions in the city of Cordoba are: 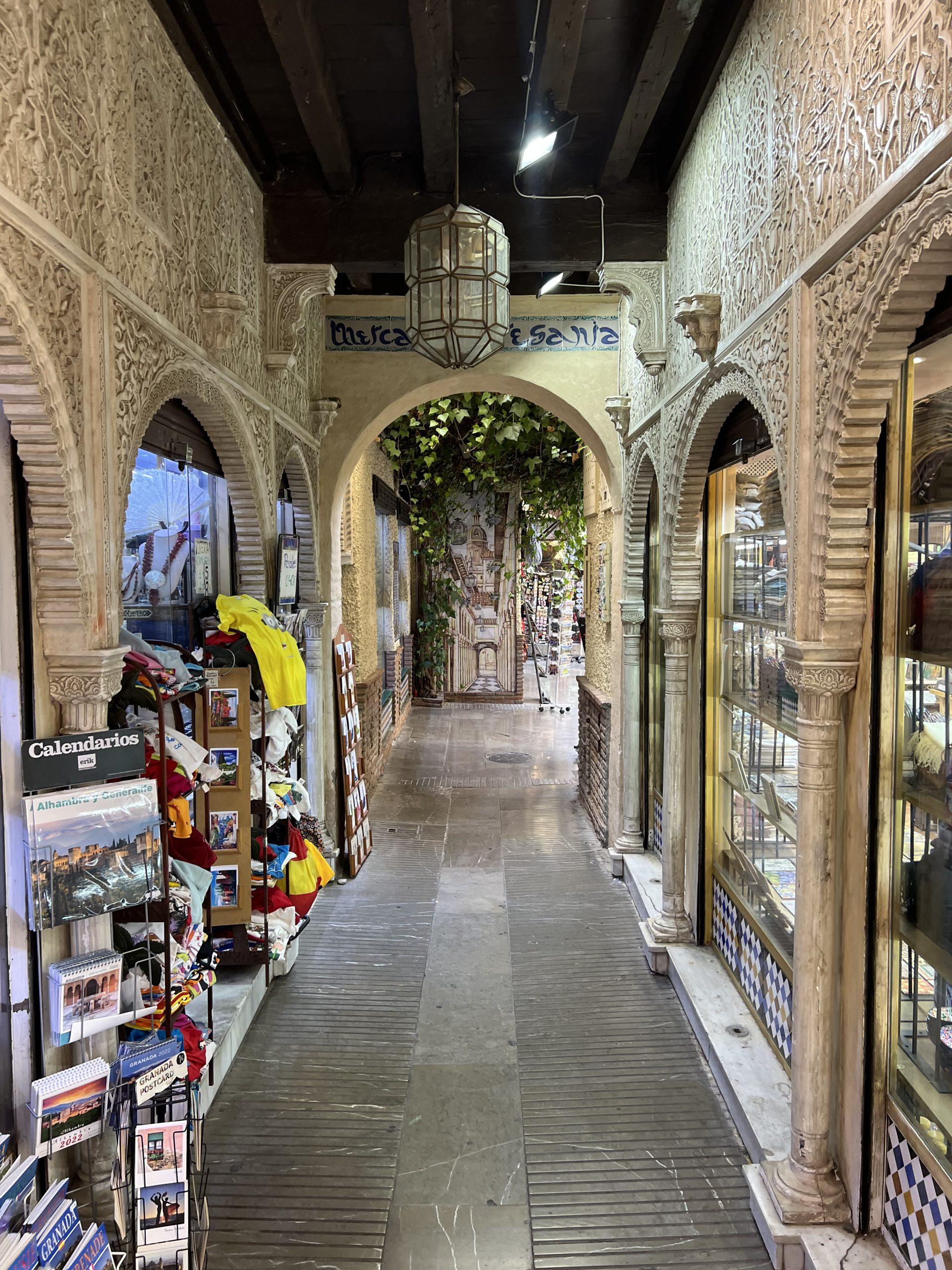 The city of Granada is home to Moorish heritage that dates back to more than 700 years ago. The marvellous streets of the Moorish city were laid in the medieval time and preserved so well that you might start thinking as if you actually live in that time.

Alhambra palace and Sierra Nevada mountain range are the highlights of the city of Granada. Alhambra is a magnificent site with enchanting palaces, courtyards and gardens.  The complex was built between 1200s and 1300s, and the emirs of the Moorish civilisation would come here to beat the heat.  If you want to spend an enthralling day in these serene courtyards and Royal chambers of the Moorish palaces, make sure to book very well in advance.

The gardens and grounds of Alhambra are so huge that you will need another day to visit and enjoy the serene beauty. Generalife has some of the most exceptional fountains, geometric pools, topiaries, hedges and architectural structures.

The Granada cathedral is the seconds largest of its kind in Spain. It was built in the 16th century with gothic foundations and renaissance interior.

Sacromonte is the traditional neighbourhood of Granada which is located in the east of Albyzin district. It remained home of gypsies for a long time and now you can witness some of the best flamenco performances here.

Some other must visit attractions in Granada include: 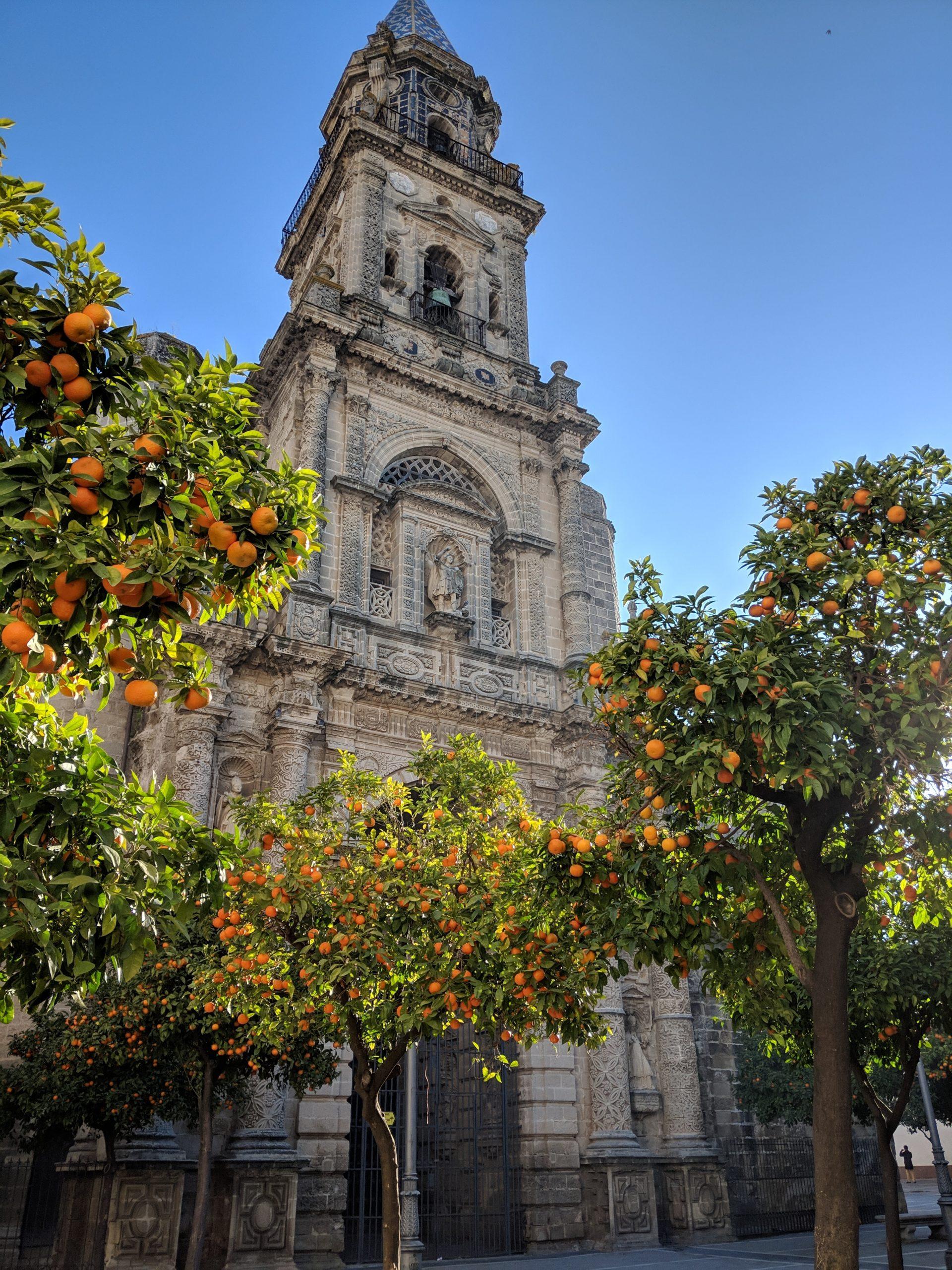 Jerez de la Frontera is blessed with numerous attractions, which keep the traveler busy as they stay in this beautiful city. It has some of the most unique architectural structures along with exceptional natural sights. The fist and the culturally most important place to visit in Jerez de la Frontera is the Alcazar. It was built between the 11th and 2th century under the Moorish rule and we can still see the watchtower and defensive walls standing tall after so many centuries.

The Jerez cathedral is located a few minutes away for the Alcazar. This beautiful masterpiece was constructed between 1695 and 1778. The bell tower is separate from the main building which was a sight for church.

If you are in Spain, you cannot miss out on the world famous show of  Andalusian Horses Dance as Jerez is home to Royal Andalusian of Equestrian Art that is native to this region. The horses as well as the riders will leave you awestruck with their skills and art.  Plaza de Toros or bullring was initially built in 1840, but required major renovation after a serious fire breakout. A series of tiles on the right side of the building are a tribute to the biggest bull ever that fought here and got killed.

These are only a few things to do in Jerez de la Frontera. If you have more time, don’t forget to visit 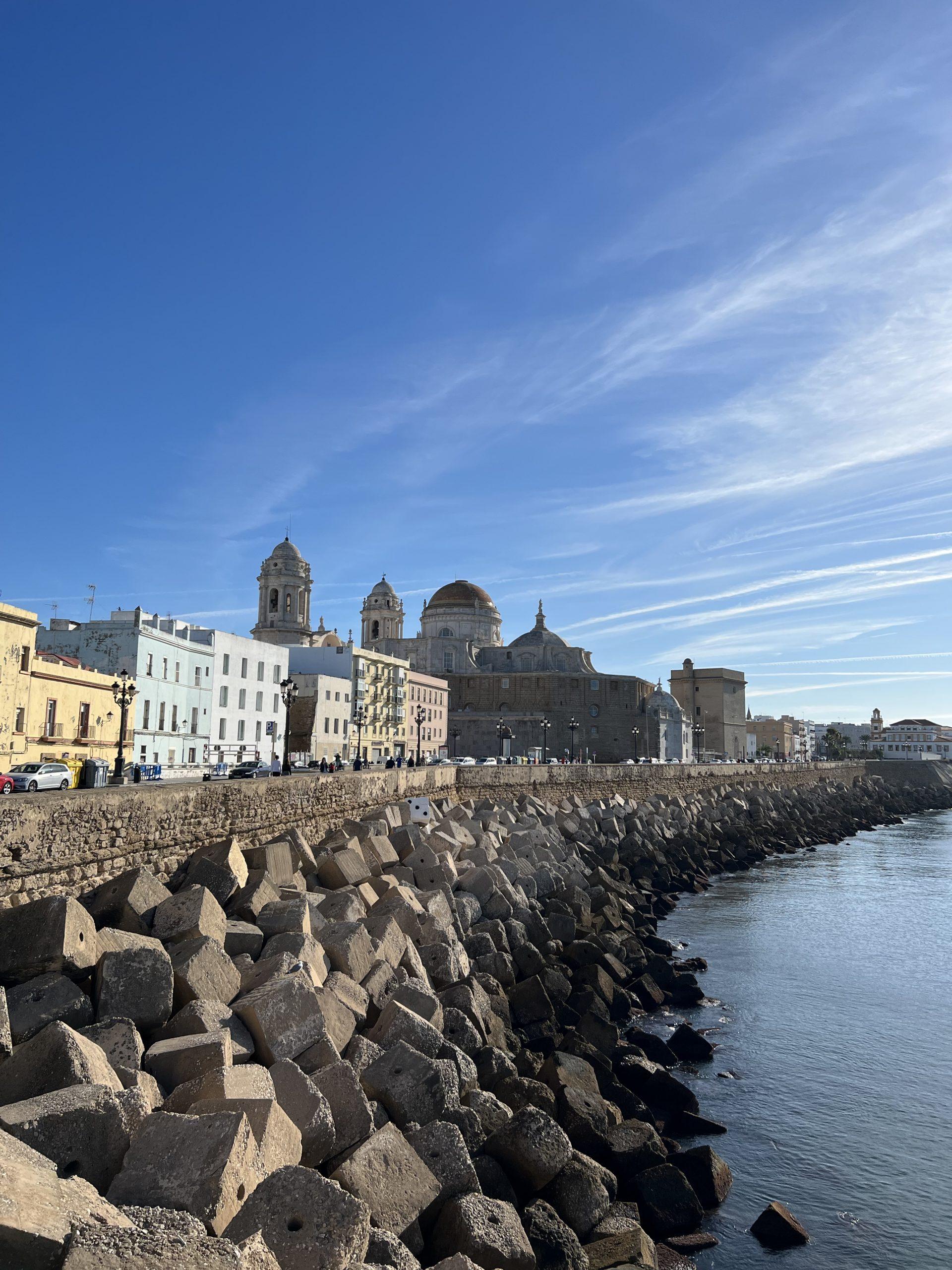 Cadiz is the capital of Costa de la Luz which became popular for its exceptional scrumptious seafood, historic centre and postcard perfect blue flag beaches. The first and the most popular attraction of Cadiz is the Castle of Saint Sebastian. The walls of the fortification offer a delightful view of the Atlantic. The lighthouse was built by Muslims and other structure was constructed in 1706. The beauty of this place attracted many directors, so you must have seen the castle in numerous movies.

Playa La Caleta is the oceanfront of the city on the western side. It is not only a simple beach side, but is of huge historical importance. This natural harbour was used by Romans, Phoenicians, and Carthaginians to moor their ships as they travelled with the waves to explore the world. Today this blue flag beach is a great relaxation point for locals as well as international travelers.

Cadiz cathedral was constructed in the rococo, neoclassical and baroque style. It offers a beautiful view of Cadiz port. It is another wonderful sight in theme city.

You can also visit the picturesque Parque Genoves, which borders the university front and offers incredible viewpoints like waterfalls, lake, sculpture of dinosaurs and botanical gardens etc. It’s a perfect relaxing spot for families with kids as well.

You may also want to visit some other destinations like: 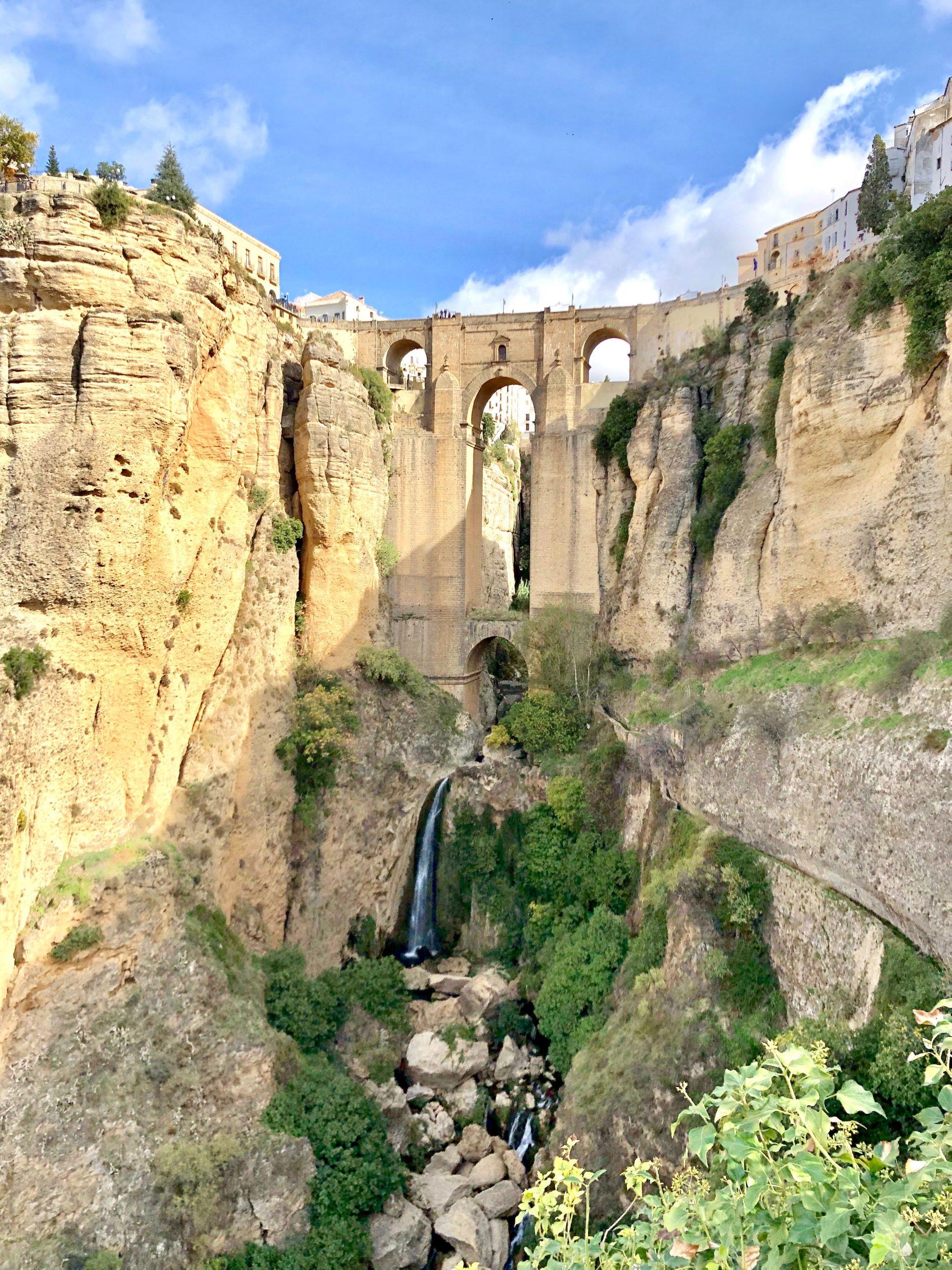 Magical little town of Ronda is another must visit region of Spain. It is the most popular spot in the province of Malaga. Most places here seem to unreal and too enchanting to be true.

Puente Nuevo is undoubtedly the most iconic structures of the whole Spain. The earliest bridge collapsed and had to be rebuilt which took about 42 years and lives of numerous workers to complete.

Puerta de Almocábar is another must visit attraction in the city of Ronda. Its Moorish origin can be identified by the horseshoe shape of the arch. It is original Arabic citadel of Ronda that depicts interesting facts about the history of the town.

Neoclassical Plaza de Toros of Ronda was built in the late 18h century, which also became the birth place of the modern bullfighting art. Bull fighting may not be equally exciting for everyone, but it is as eternal part of the Andalusian culture. Royal Cavalry of Ronda built this arena with idyllic landscape of meadows and holm oaks.

The rocky landscape of Ronda cannot have a plain garden or park if you can enjoy the serene beauty of the surroundings at Alameda del Tajo. It is an open space with plane trees and vegetation for everyone to relax and enjoy a peaceful evening under the sky.

Some other must visit attractions of Ronda include: 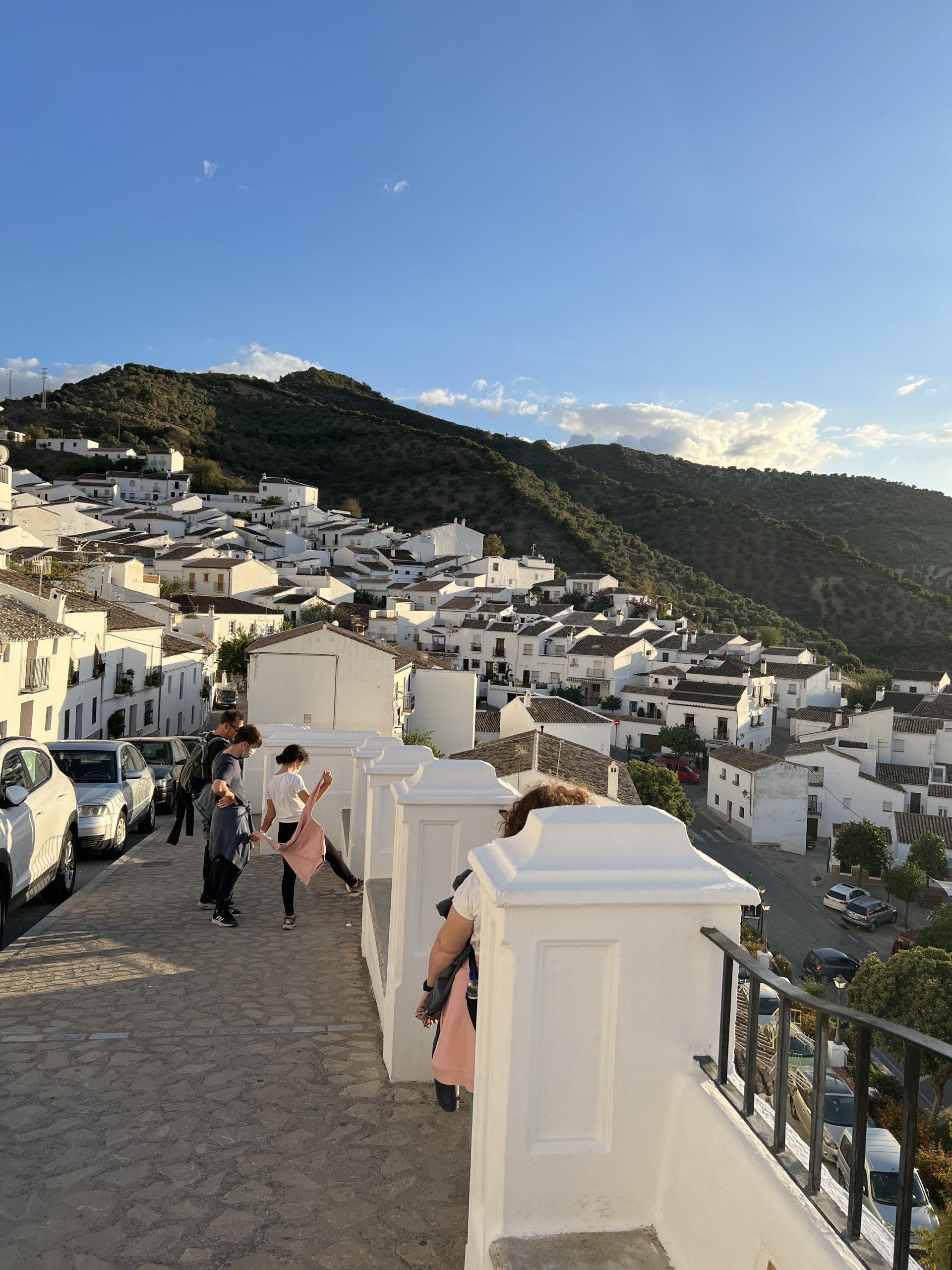 Andalusia offers a great variety of architectural wonders. These quiet and serene Hilltop villages show the enchanting Moorish charm with simple yet attractive structure.  White washed houses are surrounded by mountains that create a picture perfect view. Most of these villages are located in the Sierra de Grazalema, Sierra Nevada, and Las Alpujarras. These characteristic Moorish towns were built centuries ago but their charm and beauty has kept them alive for so long. Some of the must visit Pueblos Blancos in Andalusia are: 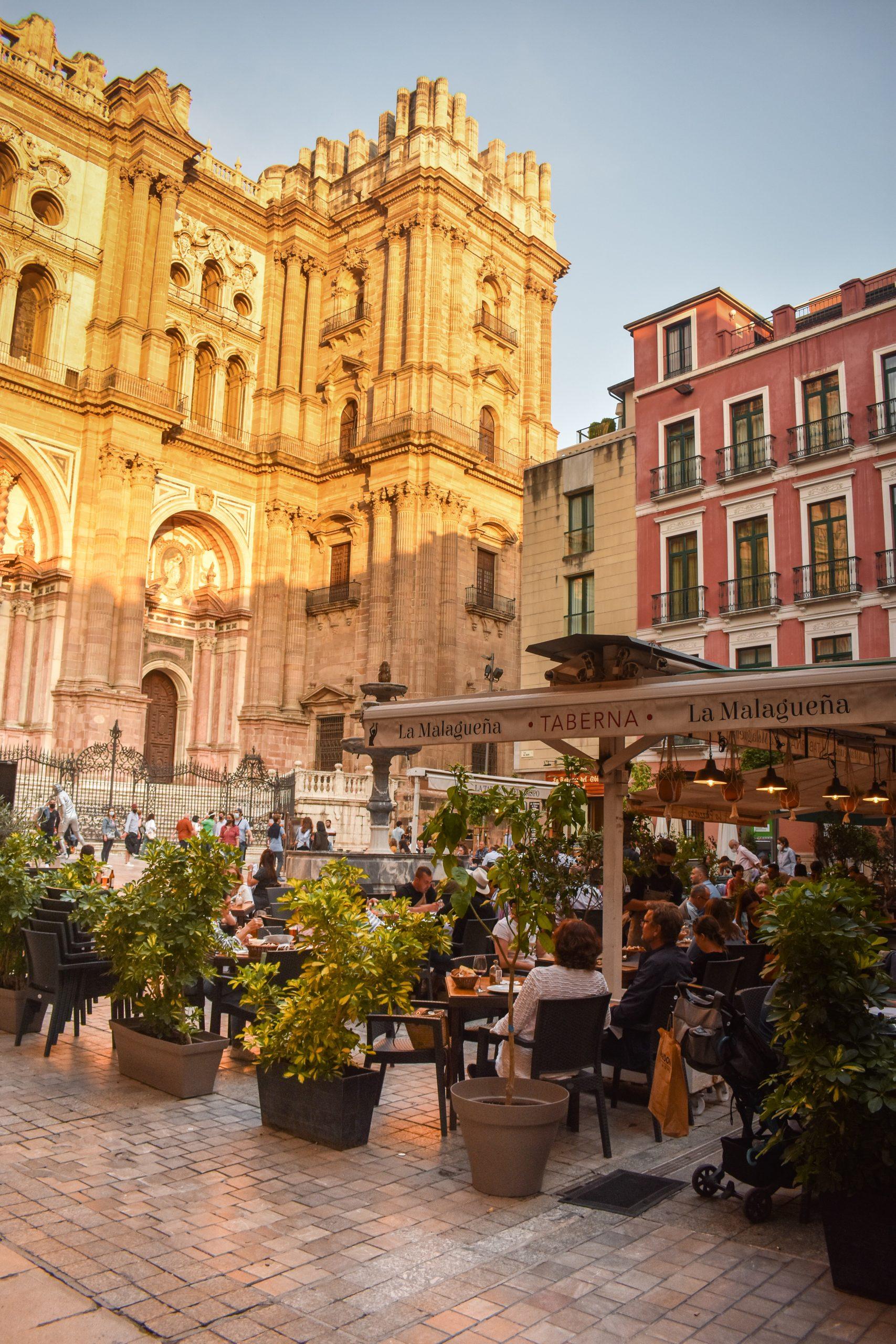 The seaside city of Malaga is known to be the capital of Costa del Sol. The city is rich in history, and depicts the Islamic history of the country in a very interesting way. You will find numerous museums and architectural structures that radiate the history of the region. It also hosts various functions that depict the Andalusian culture.

La Alcazaba is the most popular destination of the city. It is a Moorish fortress Palace that was first built in the 8th century. For the next 500 years, the Palace was expanded in different directions. Roman columns were used to build gateways, fountains, and gardens in the outer citadel of the Palace.

Just beyond the outer wall of the la Alcazaba, lies one of the most ancient monuments of the city; Roman Theatre. Romans used it for 300 years until it was finally used as a quarry by the moors.  It was re-discovered and restored in 1959 and brought to an acceptable shape.

Malaga Cathedral took one and a half century to get completed. You can instantly figure out the renaissance, and baroque style architecture. It played a significant role in the history.

Castello de Gibralfaro is also a Hilltop fortress which is also a characteristic figure of Malaga. It has towers, and ramparts that were built for war purpose. The fortress stands tall for 2500 years and the Spanish government has preserved it very well.

Some other must visit attractions of the city are:

Andalusia is a diverse and daunting region of Spain. You can have a time of your life in any major cities of the region. If you are thinking of exploring Andalusia a private tour couldn’t be a better idea,  You will be able to witness the most flamboyant mixtures of cultures. There is still clear and undeniable evidence of the existence of the Romans and the rule of Moors. The region is just perfect for a relaxing vacation away from the bust metropolitan life.

A private tour is the best way to explore the natural landscapes and towns of Andalusia.  Whenever you plan a private tour for Spain contact S4S travel agency and check the selection of small group tours and private tours here…